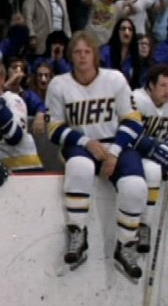 To fans of the classic hockey movie "Slapshot" Guido Tenesi is better known as the Charlestown Chiefs pretty boy Billy Charlebois. In the 1977 movie Charlebois hails from Moose Jaw, but in real life Tenesi is originally from Detroit. The American headed to Oshawa to play junior hockey and was eventually drafted by the Pittsburgh Penguins.
Tenesi's stay in Hershey was short. The defenseman played a total of 14 games over 2 seasons in the mid-1970s. Tenesi never scored a point with the Bears. His most productive seasons came as a member of the Eastern League's Johnstown Jets.
At last report, Tenesi was living in the Toronto area and was in the pool cleaning business