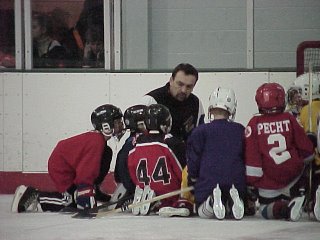 108 games for the Hershey Bears in the late 1970's. Doesn't seem like enough time to pickup 527 penalty minutes, but Nelson Burton worked hard at it. In 1978-1979 his 204 minutes was third on the Bears, behind Archie Henderson and Gary Rissling. It was during his two seasons in Hershey in which Burton made it to the NHL with the Washington Capitals. Although the Sydney, Nova Scotia native played only 8 games in the NHL, he did manage to score a single goal. The single goal beat Hall of Fame goaltender Tony Esposito.
After Hershey and Washington, there were stops in Nashville, Erie, Nova Scotia, Syracuse and Baltimore.
Today, Burton operates Nelson Hockey at the Laurel Gardens Ice House while at the same time coaching the Tri-City Eagle Midget AA team. He is also the Head Coach of the University of Maryland Terrapins Ice Hockey club.
-------
Check out Hometown Hockey for features on other minor league players of the past