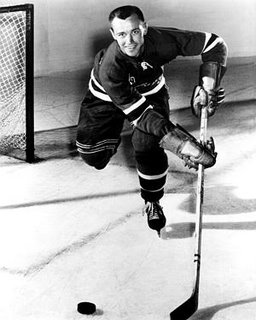 After hockey, Bruce Cline worked in many fields. Cline was a restaurant owner, a hockey stick salesman, real estate agent and owner of two clothing stores. Today, Cline and his wife of 52 years, Elyse, are settled in Drummondville, Quebec. The Massawippi, PQ native still finds time to skate and plays golf at every opportunity.
The right wing spent most of the mid 1960's in Hershey with the Bears. In 299 games, Cline scored 97 goals and 229 points. Cline also played in the AHL with the Providence Reds, Buffalo Bisons and Springfield Indians. He was AHL rookie of the year in 1956 and won four Calder Cups. When it was all said and done, Cline produced 773 AHL points
His NHL consisted of 30 games with the New York Rangers during the 1956-57 season.