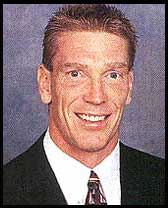 Mike Stothers is back for another season as Head Coach of the Owen Sound Attack of the Ontario Hockey League. The Toronto native played from 1984 to 1992 with the Hershey Bears. He later served as Assistant Coach for the Bears in the mid-1990s. While with the Bears, Stothers piled up 1519 minutes in penalties and remains the all-time leader in time in the box.
Stothers did manage to play 30 NHL games with the Philadelphia Flyers and hometown Toronto Maple Leafs. The defenseman was originally a first round pick of the Flyers in 1980.
Stothers is married with two daughters and enjoys spending family time at his cottage during the summer months.