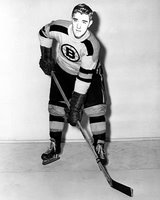 Bart Bradley spent a lifetime in hockey. First as a player, then as a scout. A well-respected hockey man. The Fort William, Ontario native settled in Delta, British Columbia after 30 years of scouting with the Boston Bruins.
Bradley spent a single season with the Hershey Bears. The center registered 35 points in 61 games during the 1949-1950 season. It was during this season Bradley played his only NHL game with the Boston Bruins. Other pro teams included the Tulsa Oilers, Tacoma Rockets, New Westminster Royals , Victoria Cougars and Seattle Americans.
Bradley's son now serves as Director of Amateur Scouting for the Bruins. As a scout, Bart Bradley was instrumental in bringing Cam Neely and Brad Park to Boston.
After hockey, Golf became Bradley's new sport. He started playing golf while at Hershey but only played at the Herhsey County Club once. He missed the opportunity to see golf professional Ben Hogan play.
Bradley passed away earlier this month after a several month battle with pneumonia.