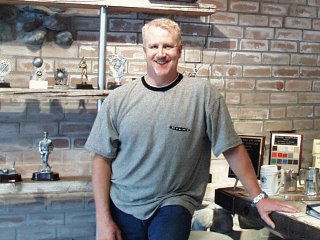 It's easy to catch up with former Hershey Bears star Alec Tidey. Check out Tidey's Trophies & Promotional Products on the web or while in North Vancouver. Tidey opened the business back in 1980 and the it is still going strong.
As a member of the Bears, Tidey played 202 games in the late 1970's and registered 157 points over parts of three seasons.
Tidey played in both the WHA with the San Diego Mariners and in the NHL with the Buffalo Sabres and Edmonton Oilers. The Vancouver native played with Wayne Gretzky in the 'Great Ones' initial NHL season.
Oddly enough, has played numerous games as a member of the Vancouver Canucks Alumni team although he never played for the team