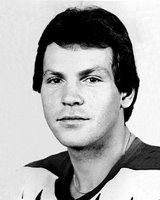 "The Bears organization was very good to me as a player and as a member of the community," according to Greg Theberge. The defenseman has great success with Hershey making the all-star team and breaking Ralph Keller's record for points by a d-man in a single season. Of course there was also the Calder Cup victory of 1980.
Hockey has always been a big part of Theberge's life as his grandfather Dit Clapper won three Stanley Cups with the Boston Bruins and is a member of the Hockey hall of Fame.
Theberge spent parts of 5 seasons in the NHL with the Washington Capitals before embarking on a career in Europe.
The Peterborough native eventually moved to North Bay, Ontario and remains active in coaching.