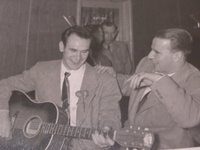 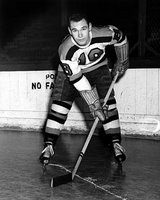 In the late 1940's Mark Marquess was the resident musician of the AHL's Hershey Bears. Marquess and his guitar spent five seasons in Hershey, only interupted by a trip to the NHL with the Boston Bruins. Marquess freely admits his days in Hershey were the best of his long professional career that saw him play for teams like the Tacoma Rockets, Seattle Bombers, Victoria Cougars and the WHL's Vancouver Canucks. To this day, Marquess keeps in touch with former Bears teammates Penti Lund, Buck Jones, Bart Bradley and Fern Flaman from his East Wenatchee, Washington home.
Marquess has another small connection to Hershey through his grandson Kyle Harris. Several years back, Harris was roommates with current Bears star Mike Green while playing junior with the Saskatoon Blades.
Today, the 81-year old Marquess boasts good health and takes every opportunity to play golf.