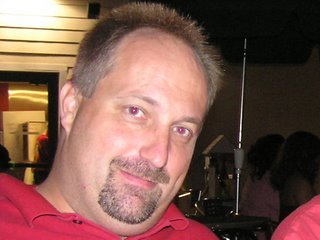 A hockey player from Greenbelt, Maryland? Sure. The following is the wacky hockey travels of "Scheif." Left Maryland to play junior in Stratford, Ontario. Drafted by the OHL Toronto Marlboros, decided to head to Boston College. The first non- New Englander recruit by the B.C. Eagles. Took time out his freshman year to wreck Brian Leetch's Volvo. Headed to Moscow as a member of the USA World Junior National Team. While in Russia played with John LeClair, Jeremy Roenick and other future NHL stars. Left Boston College early to sign with Bobby Clarke and the Philadelphia Flyers. Two years in the minors split between the Hershey Bears and the ECHL Richmond Renegades. Held the ECHL record for the fastest goal from the start of a game. Then it was over.
Today, Scheifele resides in Florida and is knee deep in the insurance game. Extra time is now spent out on his boat fishing the weekends away.
Steve's favorite websites www.fishreports.net & www.benjerry.com

My sister had a crush on you in high school! She even started playing hockey just to get your attention! Nice to hear you're doing well. Jerry Krasnick (Shani Krasnick's brother)

I used to play street hockey with Steve in Greenbelt at the Univ. Square tennis court. I also am friends with his sister Heather. Remember the Schachter's?

I used to play street hockey with Steve in Greenbelt at the Univ. Square tennis court. I also am friends with his sister Heather. Remember the Schachter's?

He helped me learn the fundamentals of the game when he worked as an instructor at Twin Ponds East in Harrisburg, PA. Around 1997-1998.