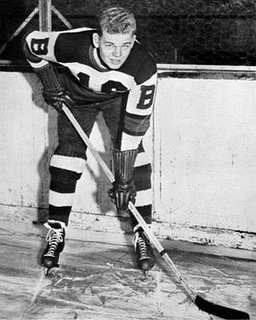 One of your older Bear Alumni, Ray Getliffe had a very short run in Chocolatetown. When Getliffe arrived in Hershey during the 1938-39 season he was already an established NHL star with Boston Bruins. The talented forward was sent to Hershey on an injury rehabilitation assignment. In four games with the Bears, Getliffe picked up a goal and four assists. Then it was back to the NHL. Getliffe was an effective left winger and a Stanley Cup champion during his nine seasons. However, Getliffe may be best known for giving Montreal Canadien star Maurice Richard the nickname "Rocket."
Now 91 years old, the London, Ontario resident still plays golf and spent a day with the Stanley Cup earlier this summer.