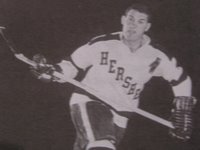 Pete Ford played 223 with the Hershey Bears in the late 1960's. He never made it to the NHL. Ford turned pro in 1962 in the old Eastern Professional Hockey League and finally called it quits in 1974 after a season with the Macon Whoopees of the Southern Hockey League. From there it was senior hockey in Ontario. The American League was as good as it got for Ford. He also played parts of three seasons with the rival Baltimore Clippers. However, his ultimate achievement in the AHL was winning the Calder Cup as a member of the 1969 Bears.
The 64-year old is currently a resident of beautiful Gananoque, Ontario an at last report was the owner of a house painting business.