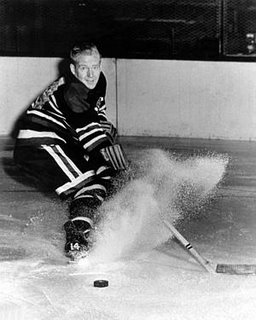 "I loved Hershey. We got to know most of the fans. In the bigger cities the fans disappear after the games. In Hershey, you would see them in town or out shopping. I also enjoyed driving around the area. I would take trips to Gettysburg and Hanover Farms, " Lorne Davis (2001).
It is hard to believe the number of towns and cities Davis played in during his 15 year professional career. Try Victoria, Montreal, Vancouver, Buffalo, Edmonton, Detroit, Chicago , Providence, Boston, Saskatoon, Muskegon, Winnipeg and of course Hershey. In the time of the six team NHL, Davis played for four of them.
Davis spent the mid 1950's with the Bears playing right wing. Davis tallied 114 games over 177 games while in Hershey. The Regina native also played just under 100 NHL games.
After his playing career, Davis became a scout. He spent 34 years scouting and also served as Co-Coach of the 1980 Canadian Olympic Team at Lake Placid. As a member of the Edmonton Oilers scouting staff, Davis was involved in the selection of Grant Fuhr and Paul Coffey.
Like so many other Bears alumni, Davis enjoys golfing when he gets the opportunity. Davis never got too far from home, he still lives in Regina.