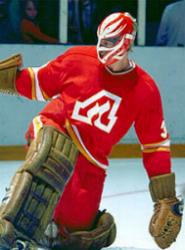 When contacted a couple years ago for a "Where Are They Now?" article for the Hershey Bears game program, Dan Bouchard was living in Marietta, Georgia and coaching hockey at Life University.
Bouchard played in 655 NHL games with the Atlanta Flames, Quebec Nordiques and Winnipeg Jets. Bouchard won 286 NHl games. However, it was with the Hershey Bears that the Quebec native picked up his first professional victory.
After a successful Ontario Hockey Association season with the Londo Knights, Bouchard turned pro with the Bears in 1970. Bouchard played 36 games while posting a goals against average of 3.13.
Bouchard was a pioneer of sorts, he was one of the first goalies to play with a curved stick. Today, Bouchard spends as much time as possible on the golf course.