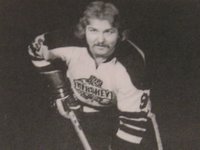 "Being part of winning the Calder Cup in 1974 was very exciting. The ability of the team to come back in games was incredible, compiling a record of 12 wins in 14 games. Winning 10 straight playoff games was a league record. We battled back in nine of them to win. Add in we won 4 of 5 sudden death overtime games," remembers left wing Terry Ewasiuk.
The Edmonton, Alberta resident was selected in the 1973 NHL draft by the Pittsburgh Penguins. He was also picked by the Chicago Cougars of the old World Hockey Association.
Ewasiuk played for the Bears between 1973 and 1975. He contributed 71 points over the two seasons and was an important cog in the run to the Bears only Calder Cup victory of the 70's.
At last report, Ewasiuk had over 20 years of service in as a Operation Tech for Dow Chemical. The Smoky Lake, Alberta native is married with three children.