Today, Scott Sandelin is the Head Coach of the Bulldogs of the University of Minnesota-Duluth. Sandelin has turned around the WCHA hockey squad and turned a struggling UMD program into a NCAA Frozen Four participant for the first time in nearly a generation three seasons ago.
Sandelin graduated from North Dakota and signed with the Montreal Canadiens. The Hibbing, MN native played for both Montreal and the Sherbrooke Canadiens before being traed to the Philadelphia Flyers.
Sandelin played parts of three seasons on the blueline with the Hershey Bears between 1988 and 1991. During that period, Sandelin also managed to play 15 games with the parent Philadelphia Flyers.
Sandelin currently lives in Hermantown, MN and is married with a daughter and son.

Jim Montgomery had one great individual season with the Hershey Bears. In fact, Montgomery led the AHL with 71 assists and registered 105 points for the Bears during the 1995-96 season. However, the Bears could do no better than a 36-33-11 season.
The Montreal native played 16 games with the Bears a season before and picked up 14 points. The majority of Montgomery's AHL time was spent with the Philadelphia Phantoms.
Although the center played in the NHl with the Blues, Canadiens, Sharks, Stars and Flyers, it could be argued his best days were playing for the University of Maine. Montgomery was the 1993 NCAA Championship Tournament MVP, 2nd team All-American and Hockey East First team All-Star.
When his 12 year professional career ended, it was back to college.
Today, Montgomery is an Assistant Coach for RPI hockey of the ECAC. Prior to RPI, Montgomery served as a Volunteer Coach with the University of Notre Dame. 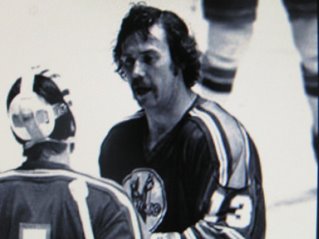 Robin Burns played 190 NHL games in the 1970s. He was a decent goal scorer whose career statistics would have been better if his time was spent with better teams.

He was a solid grinder for three years in junior then played two seasons in the CHL with the Houston Apollos. After spending a year with the Montreal Voyageurs of the AHL, Burns was traded to the Pittsburgh Penguins by the Montreal Canadiens.

Burns played sparingly for the Pens during his three years with their organization. Between 1971 and 1974 Burns spent the majority of his playing days patrolling the left wing for the Hershey Bears. In 1974, Burns was the top playoff scorer and led the Bears to the Calder Cup. Burns played 178 games for the Bears registering 146 points.

Burns was the co-founder of ITECH hockey over 20 years ago and is part owner of Mission ITECH hockey company.