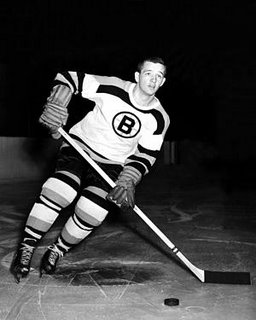 Left winger Lorne Ferguson played 142 games between 1951 and 1954 for the Hershey Bears. The Palmerston, Ontario native was a talented scorer and tallied 158 points while in Central Pennsylvania. Ferguson led the AHL in goal scoring with 45 in 1954 and was named a second team all-star.
Ferguson also made his mark in the NHL with 82 goals in 422 games while playing for the Boston Bruins, Detroit Red Wings and Chicago Blackhawks.
After hockey, Ferguson worked in sports promotions for O'Keefe Brewery and the John Labatt Brewery. Ferguson also spent time as an AHL scout for the Chicago Blackhawks.
The Kingston, Ontario resident is married with five children. 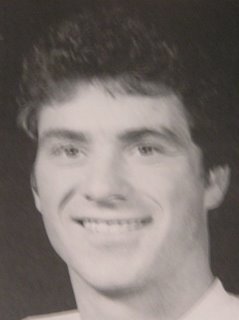 Hershey holds a special place in the heart of former Bears defenseman Brent Tremblay. The North Bay, Ontario native began dating his wife Catherine while playing in the late 1970's for Hershey. Tremblay was drafted by the Washington Capitals in 1977 and played parts of two seasons in the National Hockey League.
Today, Tremblay is a pastor at a North Bay Evangelical Church. According to Tremblay, " I have travelled extensively as a missionary aid preaching revivals and crusades while helping to establish churches worldwide."
With five children and work, Tremblay doesn've have much time to do anything else. However, he still manages to find a little time to skate and play hockey. 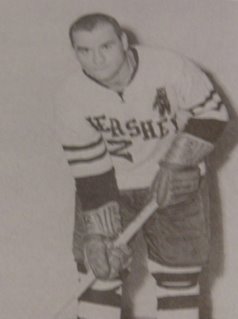 "Kemo" was originally signed with the Detroit Red Wings, but he never got to Motown. There were stops in Edmonton, Seattle, Cleveland, Hershey - but never the big time. From 1959-1962 Kinasewich played right wing for the Hershey Bears. In 208 games he tallied 132 points for the chocolate and white.
After hockey Kinasewich went into the family business running a commercial linen company. The business provides linen service to the healthcare industry in Canada, USA and England.
In his spare time, "Kemo' enjoys playing a round or two of golf.
At last report, the 73 year-old Alberta native was living in Coquitlam, British Columbia. 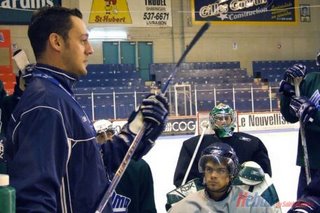 Eric Veilleux was a favorite of Head Coach Bob Hartley as the Bears won the 1997 Calder Cup over the Hamilton Bulldogs. Veilleux followed Hartley from the Cornwall Aces to the Bears. In two seasons with the Bears, Veilleux scored 123 points and worked as one of the teams top pests.
Now, Veilleux looks to follow Hartley into the NHL coaching ranks one day. In the late 1980's Hartley got his first big break coaching the Hawkesbury Hawks of the Central Junior Hockey League. A few years back, Veilleux got his coaching break with the same Hawkesbury team. Next Hartley was on to the QJMHL and the Laval Titans.
Last year, Veilleux landed the Head Coach postion with the Shawinigan Cataractes of the same QMJHL. So how long will it be before Veilleux is coaching in the AHL or NHL? If he follows in the footsteps of Hartley, the future will include a Memorial Cup, another Calder cup and mayber, just maybe a Stanley Cup.

For the Winnipeg, Manitoba native it has been a life in hockey. One of the biggest thrills for Paul Jerrard was winning the Calder Cup as a member of the 1997 Hershey Bears. Jerrard played on the blueline for 153 games for Hershey. On Novemeber 5th, 1994 Jerrard scored two shorthanded goals against in the span of 13 seconds. Jerrard totalled 52 points while with the Bears.
Most of Jerrards professional career was spent in the defunct IHL with the Kalamazoo Wings. Jerrard also had a successful career at Lake Superior State.
Jerrard mananged to get a taste of the NHL as a member of the Minnesota North Stars during the 1988-89 season.
Today, Jerrard is an Assistant Coach of the Iowa Stars of the AHL.